Last month I announced that I would be working on a new piece based on Renaissance Jam/Orchestra. Today, I want to share with you the progress that has been made, as well as the unexpected direction that the piece has taken. (Yes, I know that I wrote the piece, but how the piece is turning out is surprising and unexpected to me as well.)

A Look Back at Last Month’s “Concert Piece” Announcement

Last month, I announced that I would be making a “concert piece” based on a piece I wrote about ten years ago called “Renaissance Jam” (and sometimes I have labeled it “Renaissance Orchestra”).

I plan to create a “concert version” (i.e. highly embellished, virtuosic version) of this piece. 20th century composer, Joaquín Rodrigo, wrote many new and original works based on older pieces from the 16th and 17th centuries. In this vein, I plan to take the “jam” piece I wrote, and create a new concert version.

Expect the Unexpected: What I expected

As you can read from my previous post, I expected to create a “concert piece”, which would be “highly embellished” and “virtuosic”. I also invoke “20th century composer, Joaquín Rodrigo” as a potential influence for this new piece. In the outro, I did draw upon Joaquín Rodrigo as an influence, but not as much as I originally planned. Joaquín Rodrigo’s influence is front-and-center at the end of my piece where I drive to the end with chordal strumming.

The addition of the C#, which is the Major 7th to the first chord of the progression, and in the same register as the chord’s fundamental pitch of D is a signature of Joaquín Rodrigo’s work. He would add this extra “color” or “flavor” to a vanilla chord, which is outside of the original style of the 16th and 17th century, but familiar to the modern ear.

Also, some inspiration was taken from the texture employed in Passacaglia, the middle movement of “Tres Piezas Espanolas” by Joaquín Rodrigo. You can listen to two different performances of Passacaglia below.

Expect the Unexpected: What I did not expected

I expected that I would be drawing upon a bit of influence from Joaquín Rodrigo‘s reworking of famous composers like Gaspar Sanz. However, I did not expect that I would also be drawing upon my influences of Leo Brouwer and Toru Takemitsu, as well as the general principals of Jazz and Blues voice leading.

The form can be divided into ten or so sections. At one point, when I was still in the midst of writing this piece, I had the form written down on a big piece of paper. It was kind of like a big road map. Just by looking at the form, I could extrapolate the details and play the piece. If I got stuck, I could improvise a little bit until I got back on track in a subsequent section.

I offer the road map here so that an interested person can see the larger structure of the piece. If you choose to purchase the piece, I encourage you to reference this as you are learning.

The piece starts with an Intro that alternates between E min 7 and E maj 9 and ends with a D# which brings out the Major 7 quality of the latter. A lot of space is intentionally left between the notes, which can be filled in with ad lib percussion. In some ways, the intro reminds me of the blues, because the third (G pitch) moves from minor (G Natural) to major (G Sharp).

In its texture, however, it reminds me of the second movement from Leo Brouwer’s “El Decameron Negro”. That piece starts with an E Major 7 with a lot of space between the notes.

The second tremolo section starts in a higher register and uses a quintuplet tremolo, which was first introduced to me by maestro Eliot Fisk.

In a similar style and texture to J. Rodrigo’s “Passacaglia” mentioned before, this chordal section has quick arpeggios and thick, dissonant chords. It is, however, not exactly the same as “Passacaglia”. For example, the bass plays a much more active role, rhythmically, in my piece.

This section came to me very late one night, and is probably the reason that the piece took the more “modern” turn that it did. I was experimenting with various things to get a sound out of the guitar that I thought would be truly captivating as a concert piece. I was having no luck trying to expand the original piece as it is quite circular (it is, after all, suppose to be a “jam” piece, and predictability is important when a group of people are jamming).

Nearly falling asleep on my instrument late at night, I was simultaneously struggling with the trials and tribulations of today’s world (i.e. getting a mortgage as a musician; something for a future blogpost). I eventually began adding some more dissonant pitches to the mix and found them hypnotic.

The section ends with quite the cluster of pitches. F#, F Natural, and E all rub against each other. This sound is suppose to “sound bad”. For me, I found it to be an accurate conveyance of exactly what I felt at the time. Life sometimes has agonizing tension, and this piece does too.

This section is the main melody in harmonics with a few added ninths and sevenths. It follows the harmonics which end the previous “Falling Arpeggio” section. It should feel quiet and light, almost “fragile”.

Very similar to the (A minor) “Rodrigo-esque chordal section”, but in E minor. The chordal voicings vary to fit the guitar in this register.

This section takes the strong motions of the bass line and puts it almost entirely onto the highest string of the guitar, the high-e string. In the middle register, we get the less stable 7th’s of each measure’s respective chord. This is an “upside down” re-rendering of the chord, but I found it to be satisfying, unique, and sufficiently convincing.

This section is the apex of the piece in many ways. It is loud, but it also tests the boundaries of the chord progression. Many tones that conflict with the progression’s framework are intentionally added to create the feeling of “strife” and “agony”. However, just enough of the original progression remains that it is recognizable.

One piece by Toru Takemitsu called “Folios”, which is completely original and quite atonal, ends with a verbatim quotation of a piece by Bach. In the end, I chose to do something similar with my piece. After the listener has heard the variations of the “theme”, we finally get its “recap” in E Minor as well as A Minor, which breaks apart a little bit near the end of its second iteration and finally dovetails into the Outro.

I wanted a lot of sound in the Outro section. I also wanted to draw upon the 7th chord texture mentioned before. Lastly, I hope that I chose the appropriate amount of “spice” and “power” for this section.

Sneak Preview of Kaleidoscope for Guitar

Below is a recording of my “sneak peak” performance of the new piece. The piece is a little new to me, and therefore the performance is a little “green” but the ideas are all there. Also, please be aware that the mic I used got “overdriven”. I will record a higher quality version, but I did not want to miss the opportunity to share my progress with you. Enjoy! 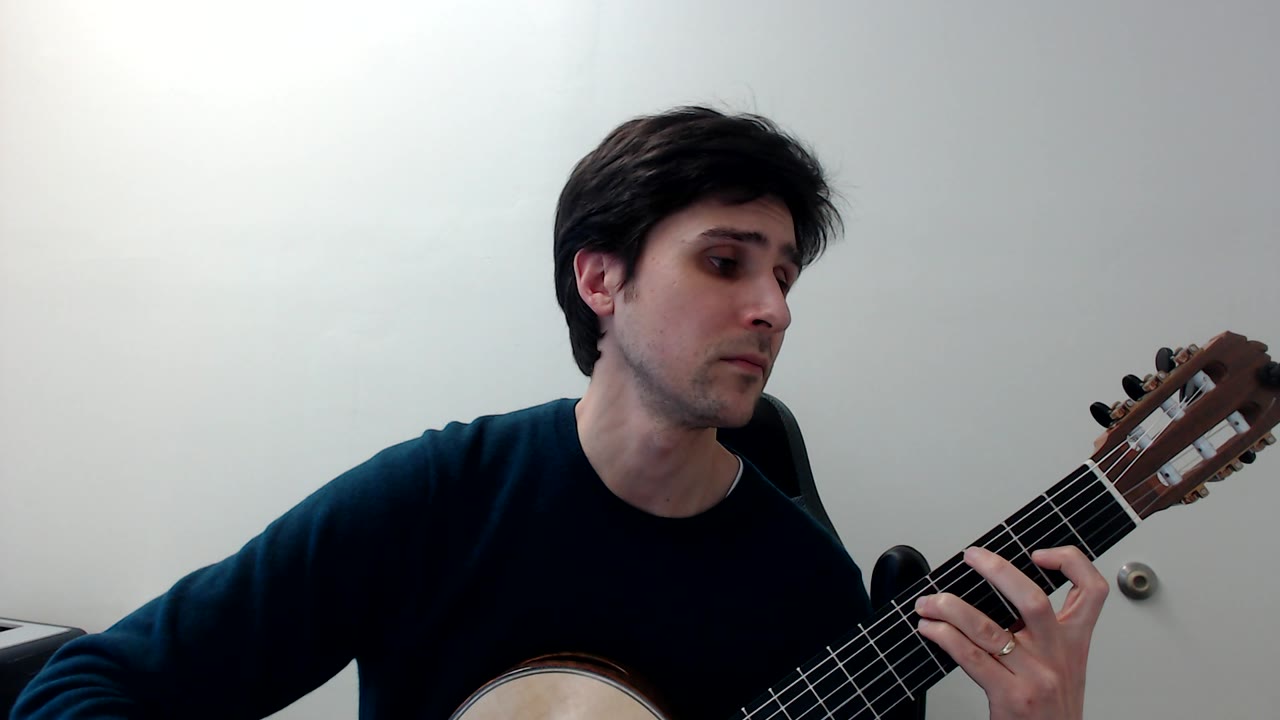 Thank you for being a Member!

Memberships made this article and this piece possible. So, if you are a member, Thank You! If you are not a member, please consider becoming a member. Tiers start from as little as $5 one-time and $7/month.

If you are not yet ready to become a member, you can always stay connected by joining the newsletter. You will be notified once this piece is available in the store. Also, as a member, you will enjoy a discount, partial or full depending on your tier. Lastly, if you would like a lesson on this piece and/or others, please contact me.

There are no users currently online